Like many people, as I’ve gotten older, I’ve had more medical issues to deal with. In May 2017 I had my first instance of sepsis (blood infection). The source of this was never totally determined, but at the time I was being treated for a hole in the bottom of my right foot because of a large callus that had broken off that was over some arthritic growth behind my big toe. But I had also had several polyps removed during my first colonoscopy.

Then in January of 2018 I developed an infection under the graft that I’d had for my foot problem and ended up with my second bout of sepsis. This time I recognized the symptoms early on and so again called the ambulance for a ride to the ER where they opened up the infection and drained it (ouch!). Another several days in the ICU on multiple antibiotics then a few more days in critical care until the infection was under control.

While still in the hospital, I was contacted to see if I was interested in participating in a study group for a new vaccine for C-diff. I qualified for this study because of my hospitalization and the multi-week IV therapy that I needed to have after my release. After a little bit of consideration and doing some initial study on C-diff, I made the decision to get involved.

For those unfamiliar with C-diff, it is most commonly contracted in a hospital setting and results in severe diarrhea. Until now there has been no way to prevent it, but a new vaccine looks to have good success.

Here is more information on C-diff if you are interested - https://clovertrial.com/en/. And here is a technical description of the study - https://clinicaltrials.gov/ct2/show/NCT03090191.

It’s now been approaching two years since I began my participation. Once a week I pull out my “electronic diary” (a low-cost cell phone with a specialized app on it) and check-in. If I have any diarrhea (3 times within 24 hours), then I can also use that device to log it, collect a stool sample, and ask them to come pick it up (I have not had any thus far). The trial is scheduled to complete in September 2020. I’m hoping that then I can find out if I received the actual vaccine or the placebo and what the results of the study have been.

Because of both the dementia in my own family (my father), and in my sister’s family (her mother-in-law), I’ve been supporting the Alzheimer’s Association (www.alz.org) with contributions for several years. Earlier this year, I received a notification for something called GeneMatch where you could submit your DNA (a cheek swab) and see if you were eligible for any of the various research trials related to Alzheimer’s prevention (see https://www.alz.org/alzheimers-dementia/research_progress/clinical-trials). I figured, why not, and signed up for it. I received the cheek-swab kit and submitted it.

The first trial I qualified for was called Reveal-Scan (see https://pennmemorycenter.org/research/open-research-studies/the-reveal-scan-study/). Participants in this study had a PET scan of their brain and required five visits to the University of Pennsylvania over a seven-month period. Half of the participants were given the results of the scan at the beginning of the study and half were not (they would receive the results at the end of the study). The study was looking at the impact on people finding out of they had the markers for potential Alzheimer’s. I took a trip to Philadelphia where I underwent an evaluation. Unfortunately, they already had enough participants who had similar demographics to me and so I was rejected. ☹ But they also asked if I was willing to be considered for other studies and I replied in the affirmative.

A few weeks later I was contacted regarding another study known as the ABC study – short for Aging Brain Cohort (see https://pennmemorycenter.org/research/open-research-studies/abc/ for more details). This study is a longitudinal study that examines participants over many years to assess the affect of aging on their mental abilities. But it also asks all participants to have an MRI and either a PET scan or a Lumbar Puncture (spinal tap). Finally, it asks participants to consider donating their brain upon their passing. Because of all these components, my wife was a bit hesitant to let me participate, but I decided to go ahead and, with her permission, I enrolled.

At the end of October, I took another trip down to UPenn for my first annual evaluation visit. This was a multi-phase visit that included my initial check-in, a blood sample, and an intense mental exam. At the end of the testing, I was mentally exhausted from the long testing battery. The point is not to get “right” or “wrong” answers, but by retaking the same test on an annual basis they are looking at changes in your results over time. But now I know what to expect each year.

In November, I agreed to undergo the lumbar puncture. Since your CSF (Cerebral-Spinal Fluid) is in contact with the brain, they can examine it for various proteins which give an indication of what is going on with the brain chemistry. Since it is only by doing a post-death evaluation of the brain that Alzheimer's can be positively identified, being able to do studies of living individuals is a valuable part of the process of understanding the various stages of pre-dementia.

I drove down to UPenn (in early morning rush hour - the worst part of the experience) for my appointment. Stripped to the waist and in a sitting position leaning over a table (to open up the spaces between the lumbar portion of the spine), they identify the space between the L3 and L4 bones, sterilize the area, give a small injection of lidocaine to numb the area, then insert a long needle into the space in the middle of the spine (see picture). This is below the level of the spinal cord (so there is no risk of damage to it), but they still have to avoid the nerves in that part of the back. 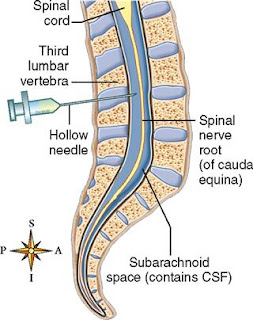 The needle is hollow and thus drips out a small amount of the CSF which they collect in a small vial. Once they have the desired amount, they withdraw the needle and just cover with a bandaid.
You have to remain quite still and hunched over during the procedure, but it was only 10-15 minutes and they were done.

There were no after effects except a "low pressure" headache. But (as I learned for the first time today), the brain totally replaces all the CSF multiple times a day, so that goes away before too much time has passed. Only post-op instructions are to lay horizontal if possible and to drink caffeine as that helps the body to close up the hole (never knew that before either). I was needing some anyway as, like most surgical procedures, I had only water after midnight.

I still have to have an MRI scheduled some time this year as well as the annual mental exams. And I am still evaluating the potential of donating my brain to science (answer is probably yes, but it’s not something that I am taking lightly).

I'm glad to be able to participate in a studies like this that will help the medical community – both with the development of a vaccine that can eliminate untold suffering from C-diff and with learning how to identify dementia/Alzheimer's as early as possible and by doing so to be able to treat it before there is any significant impact on people's lives. And while taking experimental vaccines or getting a long needle stuck in my back is not something that was particularly appealing, everything has been pretty uneventful. If you have the opportunity to participate in a medical study of any kind, I recommend that you do so. You may not benefit yourself, but others will.

Email ThisBlogThis!Share to TwitterShare to FacebookShare to Pinterest
Labels: Miscellaneous

I love to blog about several topics, the primary ones being genealogy and the history of my hometown, Wolcott, CT. You can find more about the latter at www.wolcotthistory.org.